…as a follow-up to yesterday’s post on my favourite girl-bands from the grunge era, look what I made: 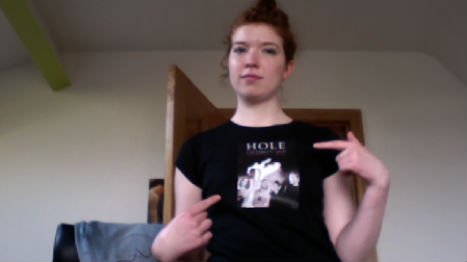 Ye-yah! It’s a Hole t-shirt. I’ve always wanted one. I was even considering giving my friend Bronagh about £15 to go buy me one at their recent gig in London. Then I realised I could buy a £1.50 black t-shirt from Primark, and a £1.25 sheet of heat transfer paper, print a design onto it and iron it on with the help of some baking parchment. Et voila! The design, by the way, comes from their 1998 album Celebrity Skin. Given my propensity towards band t-shirts, there will most certainly be more of these on the horizon.

So I’ve just got back from Northern Ireland where I was interviewing the wonderful Peter Rollins for my MA documentary and filming the Belfast leg of his Insurrection pub tour. I made a wonderful discovery, namely MacBook decals. Pete had this one on his own MBP, and when I asked him about it he said they were very easy to get online and that there were plenty of other designs available. He wasn’t kidding. After some investigation I settled on this one: 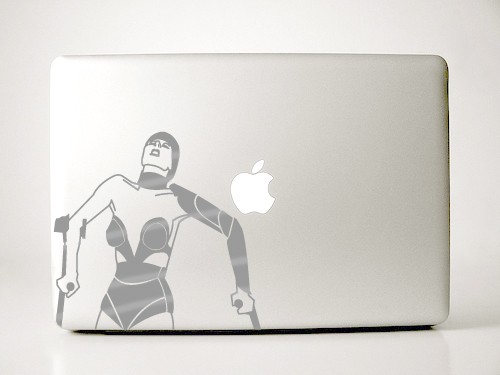 If you don’t know what it’s from, I’m not going to tell you.

The seller is Ivy Bee, and there’s plenty more where that came from…

The past few weeks I have been posting my undergrad dissertation in bite-size chunks (the story so far – part one, part two, part three, part four). Here’s part five (nearly there! bit shorter this time):

Feminist Fandom: Exploring the precarious relationship between third-wave feminism and television with reference to Sex and the City and The L Word (Part 5 of 6)

Feminists and cultural critics have always been interested in concepts of ideology. Many have drawn on the theories of Louis Althusser, who argued that institutions such as religion, government and the media operate as ‘Ideological State Apparatuses’, working in the interests of society’s dominant groups. Stuart Hall develops this further to contend that the media as an apparatus has “progressively colonized the cultural and ideological sphere”.[1] Yet Hall also argues that “ideological ‘maps of meaning’ are never simply imposed but always contested , with every sign or representation a potential point of struggle over meaning”.[2] For Gledhill, texts can be “sites of discursive struggle”, caught between the need to attract a wide audience with a familiar moral order and the need to refer to recognisable social discourses.[3] She uses Cagney and Lacey as an illustration of ‘cultural negotiation’ within popular media, arguing that the female buddy pair generates ‘conflicting codes of recognition’ that negotiate and potentially undermine ideology.

With this in mind, how do our texts disrupt ideological assumptions of their generic attributes? As we shall see, both series’ are laden with examples of the destabilisation of the status quo.

SatC bears much generic resemblance to ‘independent/single-woman’ narratives such as Bridget Jones’ Diary or Ally McBeal,[4] yet disrupts certain expectations by focussing not on a single female protagonist but on a group of women, thus allowing us to explore how a group of post-second wave women interact together and negotiate differences. Arguably, TLW subsequently builds on the codes engendered by SatC[5] but disrupts the heteronormativity of this narrative by centring it on queer women. Thus it is arguably important that TLW shares SatC’s bourgeois values because it means that it can play with the cultural codes we have gained from familiarity with the series. These cultural codes will mobilise a certain set of expectations even in those who do not watch SatC due to SatC’s popularity and omnipresence in the media. Therefore, TLW is able to build on this frame of reference to attend to the areas of contemporary feminism not addressed by SatC (primarily queer sexualities and genders, race, class, disability). It could be argued that the series needs already-established cultural codes in order to upend them.

END_OF_DOCUMENT_TOKEN_TO_BE_REPLACED

The past few weeks I have begun posting my undergrad dissertation in bite-size chunks (here’s part one, part two and part three). This week it’s part four of:

Feminist Fandom: Exploring the precarious relationship between third-wave feminism and television with reference to Sex and the City and The L Word (Part 4 of 6)

A frequent criticism levelled at SatC and TLW, often to refute either show’s usefulness as a feminist text, is the fact that almost all the main characters present as gender-conforming and conventionally feminine. Feminism has traditionally taken an oppositional stance to fashion and beauty practices. Janet Radcliffe Richards succinctly enumerates the aspects of these practices which are “obvious causes for feminist concern”.[1] Perhaps the most obvious is the large investment of time and money women are required to dedicate to their appearance “when no comparable demands are made of men”; secondly, the standards are set impossibly high. A third issue is that tastes are too standardised, allowing little room for diversity. Finally, citing the examples of corsets and high-heeled shoes, she explains how the demands of fashion itself are often constricting and not conducive to health or free movement. Hollows delineates how these evaluations have led to a politicisation of feminist dress, which produced anti-fashion strategies of either adopting traditionally masculine attire or attempting to escape the idea of fashion altogether and encourage women to “do their own thing”.[2]

Third-wave feminist attitudes have moved beyond this perspective. Although feminists continue to critique the misogynistic elements of fashion and beauty practices, there is a general agreement that it is possible to negotiate a politically engaged yet enjoyable relationship with fashion.[3]

With this in mind, how do SatC and TLW engage with these contemporary feminist debates about fashion and femininity? It is clear almost all the primary characters are conventionally feminine, slim and attractive, and it has been argued[4] that this failure to present any alternative to the norm risks negating any potential feminist substance. However, a closer look at each programme reveals that, rather than unquestioningly following conventions, each in its own way sincerely engages with discussions of fashion and femininity as they operate in a third wave context.

It is commonly acknowledged that fashion plays an intrinsic role in SatC, with many viewers claiming to watch it primarily for the fashion. SatC impacts on both the fashion world (with many magazines running fashion spreads inspired by the trends popularised by the series[5]) and the viewer at home (the programme’s influence on women’s purchasing habits has been widely documented[6] and “a large section of its audience watch it primarily to see the clothes”[7]). This obviously adds to the fantasy appeal of the series; however, the most relevant aspect of the role of fashion within SatC is the way in which fashion functions as spectacular within the narrative. In an essay titled “‘Fashion is the Fifth Character’”, Bruzzi and Church Gibson elaborate on the “bold and innovative”[8] use of fashion within the narrative. Whereas the common approach of Hollywood film and television is for costume to be subservient to character and action, in SatC it “exist[s] independently of script and narrative”.[9] Wardrobe serves a spectacular purpose and provides critics with multiple “rich and ambivalent”[10] readings; importantly, it can also provide an abundance of material to consider in the light of contemporary dialogues within feminism.

END_OF_DOCUMENT_TOKEN_TO_BE_REPLACED

'It Chooses You' by Miranda July